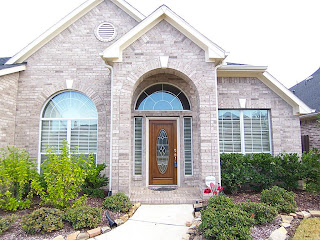 Life has been a whirlwind these past few months.  Besides the happy news in my last post about being pregnant, we have made so many changes around here.  The biggest change is that we bought a new house.  We also decided to rent our old house which was a time intensive and sometimes amusing process.  We bought a new car and sold my old car that had just short of 250,000 miles on it.  G wouldn't let me keep driving it because of the baby.  There have been endless lists of things to do every week and slowly everything is getting accomplished.  These are the biggies that have been going on but as you can imagine, there are so many details in between.

I wish that I had written about the whole moving process along the way to share with you.  There was so much decluttering involving Craigslist, Freecycle and charity shops.  I tried to do so much before moving, but even after moving we had a room full of stuff that we dubbed the Hoarder Room.  Sometimes we like to watch that show just to inspire ourselves to tackle the piles that were left.  G likes to put his hands up like a camera and make the creepy music sounds from the show.  We were never that bad, but  I'm happy to report that this room is almost empty now.  It was another stripping of some sentimental things, and some things I just gave up and put them away.  I still can't let go of my prom dress!

Since we found out we are having a girl, I was so excited that a few of my sentimental childhood possessions can end up in her sweet nursery.  She can play with my Cabbage Patch dolls and anything else she would like.  It's come full circle and there is no worry about her messing them up or passing them down.  She may not even like them since she will have her own things.  I hope she does though!

One of the main reasons we wanted to move was to be in a one story instead of a two story.  We had been looking for almost a year online when we found the perfect house.  It is a one and a half story with a media/sewing room upstairs.  We love it!  It is a bigger house and three bedrooms like our old house, however the closets are so much smaller.  This is a house made for a minimalist, which I am not by the way, but I am always aspiring to have less and it's a perfect reminder to have fewer possessions stuffed back in the closet.  Adding baby stuff to the mix has been really interesting!

My pregnancy is going so smoothly that I can't complain at all.  I haven't had any problems and I'm so thankful for this little girl that moves around all the time inside of me.  We have been working on her nursery for over a couple months now and just finished it.  I can't wait to show you pictures.  It was so fun to put together a mixture of old and new along with items that were given to us.  Here's a little preview.  This is just the girl part of the banner from our gender reveal party. 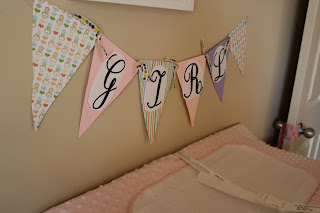 Congratulations to you both on your pregnancy, and the house and the car and, oh my, so much to be grateful for and excited about :)

congratulations! how exciting, a baby and a new home.

i have no idea why i thought your had stopped blogging but i just read quite a few of your posts and see that your blog is indeed quite alive!

i'm adding you to my sidebar and so glad to see you are still blogging.

Adrienne, Thanks so much! We are SO grateful! Only 13 days left. :)

Janet, I practically did stop blogging! I'm so unreliable, a remedial blogger really. Thanks so much for adding me to your blog and for the congratulations. I'll do my best to live up to your sidebar. :)