Last night I had a surprise party for Gustavo's birthday.  It was a lot of work trying to do the surprise element but it turned out perfectly!  He was surprised and kind of speechless really. I couldn't have done it without clever friends who found ways to distract him and lots of people who managed to not divulge the secret ahead of time. 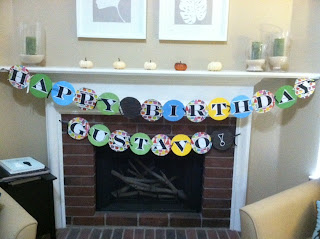 He thought we were having a "Dinner for 8" that we often have as a rotating dinner with our group at church.  I could look like I was preparing for a dinner, but not a dinner for 42. Fortunately I had a tag team of two guys who helped me have the afternoon to prepare.  He went shooting with one and had a meeting about some software with the other.  I was worried he would be early but he was actually late!

I decided to order some Texas BBQ so that the main part of the meal was catered.  I bought canned baked beans which I doctored up and a lot of potato salad.  Two friends offered to make homemade macaroni and cheese and rolls which were great additions.  I threw in some hamburger buns and we had our chopped beef BBQ dinner with not a lot of prep time.

I wanted to spend most of my time on the cupcakes because that is what I love making the most.  We had chocolate with buttercream icing and spice cupcakes with cream cheese icing. I use box cake but always make homemade icing. 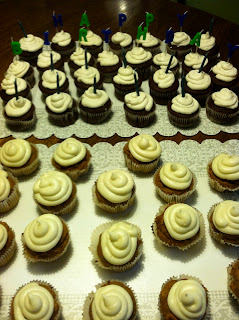 I was contemplating my options for decorations because I wanted the house to look festive. I thought about doing those tissue paper pom poms, but decided against it.  I already mentioned that I added some simple fall updates and I also popped to TJ Maxx and got a yellow harvest color tablecloth.  In the end, I decided to make a homemade banner and felt it was sufficient party decor.  I followed this tutorial from Katydid and Kid and it worked out great. It took me about an hour to make and we just can use the happy birthday part over and over for future parties.  I am not the most crafty person so I was really proud of it.

Besides the food and decorations, I'm the most happy about all our friends and G's family that came and made the party a success.  They parked far away so he wouldn't suspect anything, they yelled surprise at just the right time and generally are just a fabulous group of people.  There were lots of children there which makes the party so much more special.

Who else has pulled off a surprise party?  I loved giving one but I would hate receiving one. Have you stepped out of your comfort zone to do something crafty?  Even as I was picking out the scrapbook paper, I was thinking "This really isn't necessary.", but since I tried my hand at it I'm happy I can add another skill to my arsenal.

*************
P.S.  I was so busy that I didn't have time to take many pictures and I was really upset about that.  Also, my camera has continually disappointed me during these last 29 days.  If you have a recommendation for a starter fancy pants camera, please advise.
at October 29, 2011

I like the minimal decorations (and I wouldn't notice anything but the cupcakes anyway!). I threw my husband a surprise party for his 30th and pulled it off! He just thought we were going to a seminar at church that was really the next night (good thing he doesn't listen during announcements!).

I'm so glad it worked out and the cupcakes look delicious!

I love surprise parties. Yours sounds like it turned out great. I gave my parents a joint surprise 80th birthday party. My dad said it was the first time in his life that he had been surprised.

Anon-It helps to have an uncurious husband, doesn't it? I was amazed at how little he was suspicious! Good for you pulling it off too!

Juhli-Thanks so much! There were plenty left over! I just gave away the last three to the neighbors.

Grammy Goodwill-How cool that you gave your parents a party, although at that age yelling surprise might not be too smart! I think being surprised is kind of a high that people don't experience often.

Great Job! Minimal decorations work for me; it's about the people and the food. :)
I am pretty happy with my Panasonic Lumix. You can adjust it manually or leave it on auto. Even has video (haven't used that yet). Nice sharp photos.
~skye