Oh the shame of my desk.  I did not make this look worse so that my after could look better.  It really looked this bad. 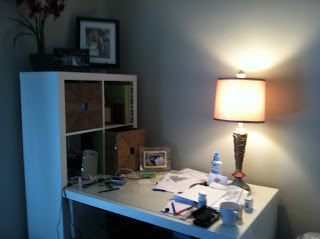 This is the multitude of un-filed papers and other junk I didn't know where to put. 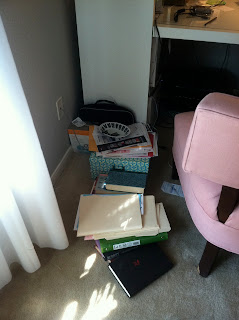 I don't have the most convenient system for filing which is why I delay doing it.  There is a file box in one of those holes.  I have to pull it out and it's awkward because I have a big laser printer under the desk.  I also have a color printer crammed in there.

This is my office space so I don't want to move it anywhere else.  If I hadn't paid $600 for the laser printer, I would like to scale down.  As long as it still works though, I'll use it.

This project took a couple of hours.  G was on the floor by the bed cleaning out his nightstand which was an equally big task.  He doesn't like to clean out papers but he said that he got a "high" from throwing all that stuff away.

Here is the desk after.  The pictures are terrible but you get the idea.  It feels so much better.  Happy feng shui'd desk here- 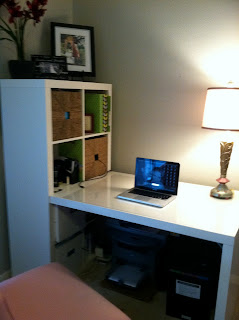 The two printers and the shredder trying to hide under the desk.  The power surge plug is full. 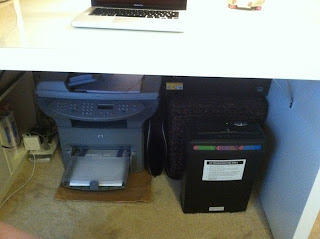 The top basket has all my stationery and address book in it.  The basket with the cord sticking out has electronics things in it.  The cord goes to my backup.  I hate cords. 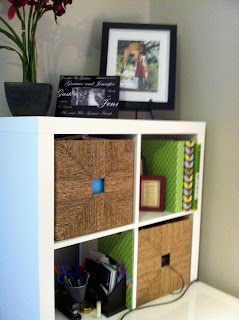 I found a check that I thought I lost and $60!  It was a profitable day.

It was hard for me to start this because it felt so insurmountable.  When you have an active desk that isn't just there to be pretty, it's hard to keep it clean.  There are always papers coming in and pending things to do.  I'm the kind of person that doesn't like to put things away because I'll forget about it.  It has to be out in the open to remind me.

This desk is from Ikea and all the baskets and file boxes too.

So this is just me keeping it real.  I'm not an interior designer and this blog isn't meant to be that.  I want to write to encourage you to let go of more things than you think you can.  I have a pile in the dining room of things I didn't think I wanted to give away.  I think I'm going to have some girls over and just let them take whatever they want.  Some girls are just starting in their household and would like some of these picture frames and other odds and ends.

Our bedroom feels so much lighter now.  It had felt it very cluttered lately but I couldn't put my finger on exactly why it felt that way.  When we started this, I thought it was just the desk, but it was the nightstands and an extra storage basket that we moved.  It feels good.  We could have only accomplished that by getting rid of some things.

Why don't you take some items out of your space and see how it makes you and the room feel?  Just do it for a trial period and see if you can breathe better.  Let me know how it goes.
at October 15, 2011

You go girl, unfortunately my desk looks worse than your "before" photo!! I have a phobia about filing and like to put my hands right on what I need as well.

It must be done, and I know I will feel better after.

Oh I have a designer pillow Giveaway I hope you will join! (a great resource as well),

Filing is just so annoying, especially when I feel like I get hangnails shoving papers in there. I'm just wondering if I'm really keeping too much. It's conditioning that makes me feel like I have to keep a bill that's sent, but the ones that are paperless don't ever matter. Something to consider.

Thanks for telling me about the pillow giveaway. I'll check it out.