Nordstrom Anniversary Preview 2010: Behind the Curtain 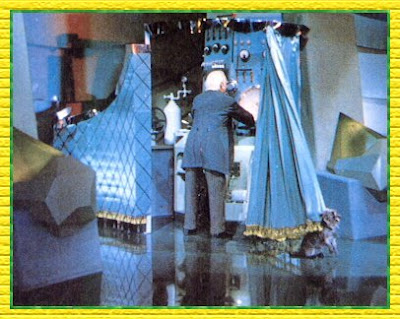 Maybe you've heard? The Nordstrom Anniversary sale starts tomorrow and all the buzz has been about the preview for the last week and a half. The Anniversary sale is special because it puts a certain selection of fall items on sale for a month of so, then raises the prices again. Last year we did not go because we were not a certain level of Nordstrom cardholders. If you are excluded from the preview, you will know that The Wizard of Oz imagery is not very far off. Everyone wants to get to the preview! This year, we caught a break though because our local store decided to let all Nordstrom cardholders in instead of just a certain level that would typically qualify. I think that was smart of them.
Let me take you behind the curtains to what we saw. Essentially there are two separate curtained off spaces, one for women and one for men and accessories. You have to make an appointment so that you are accompanied by a salesperson, and you get two hours to shop. At first glance, the partitioned rooms seem to be small and unimpressive. Imagine a retail yard sale with racks of clothes along the wall and metal tables full of shoes and purses. There are an impressive amount of items jammed in there though. The small rooms are deceiving because there is only one size of each item. That is why you need the salesperson to assist you, so you can get the correct size to try on your items.
Last year I went on the first day of the Anniversary Sale, which is when I had my personal shopping experience that you can read about here. The preview could potentially take this experience up one notch by not only having an appointment but by not being a part of the frenzy that occurs during the sale days. The dressing rooms are right next to the preview so they really make it all very comfortable for you to shop. I would bet that you can make an appointment with the personal shopper department to pull it all together for you. (If you are in Houston, call Scotty!)
When I went last week to the preview, I had it in my mind that I wanted to not want anything, so I looked at everything with a very critical eye. It turns out that I didn't need to worry because I really didn't like much. There were a few things that I had in mind that I was looking for, like a purse and some tall boots. They had a huge selection of purses and shoes but nothing really wowed me. I tried on a dress like one this except in pink and I liked it, but the material was a very wrinkly cotton and I try to stay away from high maintenance fabrics. 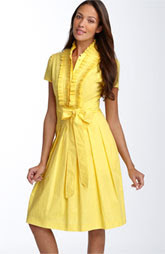 Since last year G also felt the burn of being excluded from the preview, he wanted to find out what all the fuss was about too. We journeyed back down there to see if there was something he loved. He really didn't need anything, but he did find a white shirt because who doesn't need a new white shirt? It's egyptian cotton and a blessed non-iron fabric! Now when I neglect to iron his shirts for months, he'll have something to wear besides polos. We came away with him thinking he needs a leather jacket, which is the first I had heard of it, so the power of suggestion works on men too apparently.
What struck me as I looked through the racks of clothes is that I really just don't like the fall fashion options. There is so much 80's influence right now and it's just not me. There were so many chunky, long sweaters that I suppose balance out skinny jeans. There are some years that the fashion trends just don't appeal which is when it's great to fall back on your current wardrobe and save some money.
I don't want to neglect to mention that the preview is especially great if you are looking for a hot item or hot brand because those items sell out first. There are some Tory Burch flats which always sell out fast, and certain brands of handbags will go quickly. How quickly, I don't know, but since the anniversary sale is unique because it's putting items on sale before fall gets here, I bet there is a lot of frenzy over these items because of the discount.
I'm sure that I could have found something if I really was in the buying mood, but to be honest, I had already bought a couple things for fall and needed to wait to buy anything else. It was fun to be a part of the preview and I would do it again next year. Fall is my favorite time of year because I look forward to sweaters and the cooler months. Since I'm from North Carolina, fall always meant the turning of beautiful leaves, crisp mornings, sunny days and one never forgets the importance of the back to school wardrobe. In Houston, I'll just look forward to cooler days and the energy of back to school shopping, even though I'm not in school.
What about you all? Have you been to the Nordstrom preview? Did you buy anything? Do you feel that it's just more exclusivity marketing hype, or that there is real value there?
Image here.
at July 15, 2010

I don't have a nordstrom near me so I have not been. I do like perusing their sale online and may try to do so when the sale starts. This is a tempting store and I've always liked their customer service and overall appearance of the store. You are a strong woman to resist buying anything. But if nothing looked good to you, you did the right thing. i'm not into the 80's revival either. I saw pics from the chanel fall show and every picture the girls are wearing high heeled scrunchy boots. Maybe it's because I was part of the trend the first time, but I'm not falling victim into that again. They are not flattering!

hi, i just found your blog through how to be chic.

you have so many interesting articles here to read, i'm so excited when i find a new blog that speaks to me. i already have so much to say!

i really love the quote about the catholic convent. i will def be copying that down.

Stephanie-I just love the atmosphere at Nordstrom too with the piano playing and the great customer service.

They say if you live through a trend once, that you shouldn't wear it again! Let me know if you get something online.

Janet, I'm so flattered that you like my blog! I'm very interested in what you have to say. :) I visited your blog and I can see how we have a lot in common!

I've never been, but it sounds fascinating. Personally, I have a hard time thinking about fall when it's hot outside, but a little forward planning might be a good habit to learn!

It's actually silly for me to be thinking about fall since in Houston it doesn't come until October. I wonder if that makes me an optimist?

Thanks for coming by to say hi! I'm a style struggler too and I love your blog.

Ok, so I shopped online and found my pricey favorite bras were on sale so I scooped up two, which is great because one of mine is so worn out. I also found a pair of shoes and a nightgown. Yay!

Stephanie, Awesome! I also looked because they had Chantelle, my fave brand, but I think mine can hold out another year. I hope you'll post some photos of your shoes, if not the rest. :)