What I Learned From Fashion Magazines 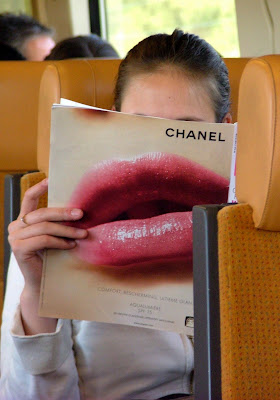 Spurred on by another 100 Things Challenge, I have been determined to whittle down the still imposing stacks of magazines at my house. I've been reading an impressive amount in a small amount of time. Some of them are two years old and I haven't even been interested enough to open them once, which is really saying a lot. All these magazines are the consequence of one little letter saying our airline points were about to expire, so we redeemed them in exchange for piles of magazines.
Now I've always loved magazines and have meticulously read them from cover to cover. I would be so excited about a fresh copy in the mail and would eagerly anticipate delving into it. Reading them was a science and I could only turn past the part that I was at in order to finish an article in the back. Apparently those days are over, because it's obvious to me now that they no longer hold the same appeal. I mean I will even flip past without reading an article which is shocking to you I'm sure. The type of magazines I'm talking about are Allure, Glamour, Vogue, and Lucky magazines which are all similar in genre, the fashion and makeup types.
I've been collecting in my head some thoughts that struck me during my marathon reading sessions.
1. WOW, Only $100! There are often budget friendly fashion articles that always leave the editor in awe that you can find great items for under $100. I would say that almost all my items are under $100 and I don't feel that in awe about it. Even if I buy something over $100, I know that I can easily find something under $100 too. One magazine was talking about a new line of jeans that are so economical but they were still $154. I'm sorry, but haven't these people been to the Gap? Besides, they put together all these economical items on a page, and the outfit is no longer economical. None of my outfits cost as much as my mortgage payment.
2. WHO would wear that? I would never wear anything they put together. I'm talking mostly about Lucky here because I think they try to be accessible to the "common girl" shopper. Magazines like Vogue are meant to be fantasy and art and of course most women wouldn't wear those outfits. But Lucky suggests some really strange combinations that maybe will fly in NYC, but here in Texas, you might look like you dressed in the dark. I like a lot of the single items in Lucky but would not wear outfits like they suggest, which is kind of puzzling because this is supposed to be inspiration for a gal like me.
3. SAVINGS! Those blasted coupons really work because they make me want to use them. Whether it's $2.00 off a Revlon lipstick or $10 off a $50 purchase, I actually feel motivated to go seek and buy. Most of the time I don't but the point is that I want to, which makes reading fashion magazines dangerous for the budget. Also, some of them will have deals with certain websites which makes us want to shop more. At least they don't hide their motive because Lucky is the "magazine about shopping."
4. DANG, I'm Persistent! If I see something I like, I will try to find it. Maybe this is obvious but this is also dangerous because I now want something that I didn't know existed, which leads me to the point that magazines are basically just commercials that you pay to read. I know, I know it's obvious but is it to everyone?
5. You will never catch up! Trends are not style, but they are like a buffet that you can pick and choose what you like at the moment. If you bank your whole style on trends, you will be out of style before you blink. You can't try to keep up with the magazines because it is their job to make sure that you don't. I heard somewhere that if a trend ends up at Target, that it's already out of style. That may be true according to fashion standards, but should it matter to me? I want to be chic but I don't have to be a part of the super trendy set. At some point, you can't really avoid the trends. Almost everything is a trend, but some items do endure longer.
I still think magazines can be great to update you, inspire you and even motivate you to keep your look polished and together. Reading them en masse though has made me feel as force fed as french goose. It's all about marketing and I have to be a willing participant for it to work. I still love fashion and I do spend my money on clothes and beauty products, but don't be like a sheep being led to the slaughter. Know that you are being sold and not educated when you read the magazines. (I don't know what is inspiring these graphic animal references by the way!)
How do you all feel about fashion magazines? Do you feel like you are being sold on every page, whether it's an ad, or an editorial review of a product, to a fashion layout, to a celebrity interview talking about her favorite products and designers? I'd love to hear what your take is and if you even read them.
P.S. A post coming up about some Tory Burch shoes that have left me feeling uneasy about why I wanted them, bought them, but haven't worn them. I hate giving in to peer pressure!
Image from here.
at June 24, 2010

This is a fantastic post! I totally agree, they are commercially driven and are meant to sell. Some like Vogue occasionally offer fantasy inspiration and that's what I take from them, inspiration. I would never go out and buy the exact items on the page, but would try to re-create the look with less expensive items, or maybe try to find one item if it was not unreasonable. I think it's hilarious how they think they have uncovered a miracle by finding clothing under $100. Who are these people? How do they support their wardrobe costs on their salaries? More than likely the answer is their credit cards are charged to the max and they continue to charge unless they are somehow independently wealthy.

I agree with Stephanie - I really enjoyed this post. After watching The September Issue I understood Vogue a little more - it's meant to be fantasy. Mostly with fashion magazines I read all the articles and beauty pages, and skip the fashion pages. The irony has always amused me. From working in the cosmetic industry (albeit in a tiny country) it's amazing the power magazines have over brands. Expensive advertising pages are sold and if you buy them you get more editorial which is 'supposed' to be impartial. It's not.

I gave up fashion magazines almost ten years ago and I don't miss them at all. I so agree with your assessment that trend is not style. I don't love trend and reading about them and what is "in" opens up a false need in me. Whenever I visit my hair salon and I pick up a magazine I can feel myself starting to want things that I don't really want. No, fashion mags are not for me.