I recently had an experience I thought might be helpful to share for those in the Houston area. When I moved to Houston three years ago now (!), I had longer, highlighted blonde hair.  I used to pay $75 for a haircut, highlight and style in Greenville, SC, which I don't ever remember thinking of as "cheap".  In Houston, I discovered that I was not going to find a decent salon to charge me that price.  I know I could have gone to a discount hair cuttery, but I've never been to a place like that and moving was traumatic enough. So as I started exploring this huge city, I went to several nice salons and paid for some very expensive haircuts.  One was $100 at the Jose Eber Salon and it really wasn't worth it.  What killed me is that they ask you when you make an appointment if you want your hair dried, because that's extra, $25-$45 extra.  It takes me less than 5 minutes to dry my hair so it wasn't like I needed a "blow-out" or anything. 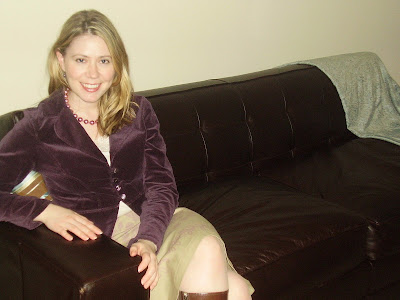 When I first moved to Houston, seems like a lifetime ago.
It took me 5 months to even get a temp job here so there was no way I could pay $150-$200 for a salon visit every couple of months.  When I realized that time was going by, my savings were depleting and I still wasn't employed, I just had all the blonde cut off and went with a pixie cut for the first time in my life. Here's a picture. 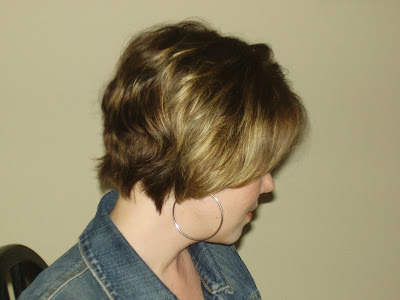 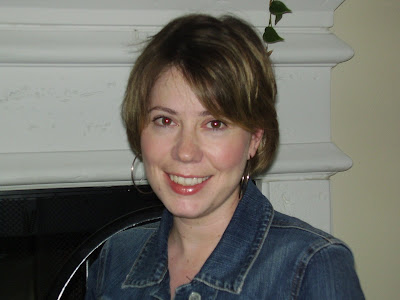 I actually really liked it although I felt naked on my neck.
For some people getting their hair cut off or letting their hair go all natural is not a big deal, but I'm one of those whiney scaredy-cats who is always saying "What should I do??"  At least that's who I used to be, before I did this.  Now, if I get a bad haircut, I'm not in tears, but it might make me mad when I'm fixing my hair.  I'm even getting adventurous and quite brave now because I even considered getting a red or purple streak!    It was Allie from My Wardrobe Today who inspired me.
I have a reason for this fear based hairdresser anxiety.  When I was in my budding adolescent years, age 13, I visited my Dad for a summer in Florida and happened to be letting my hair grow out.  We all know that letting your hair grow out is a worthwhile goal to any woman and certainly not easy to achieve as it may seem!   Well my step-mother wanted to take me to get a makeover, and she was nothing if not an embellisher of everything.  I went with her to this very special appointment with a picture of the hairstyle I wanted.  Now that I'm thinking about it, it may have been a picture of Madonna.  I loved Madonna!  Anyway, I got my haircut alright and it was a makeover, into Liza Minelli.  Oh, the horrors for a misplaced girl living in a strange place, growing up and having this happen.  It's not that the Liza Minelli can't be cute but I have fine hair and when my hair is cut into a lot of short, wispy layers with bangs, it isn't a good look for me.  I cried that day, and she made fun of me. My Dad isn't married to her anymore, but not because of that.  After that trauma, not to mention the school picture that followed, I became a nail-biting nervous wreck going to the salon.
Last summer my husband made it known that he wanted to see my hair blonde again. I informed him over and over how this was going to make me high-maintenance and costly, but he didn't care so when we went home last June I had it done.  I must admit it really is more fun to be blonde.  People are nicer to me than when my hair is darker. Now that I've taken the plunge, I feel like myself again.
Since then I've been going gradually blonder and blonder because every time I had it done, he would say, "It looks nice, but it's not that blonde."  Which I would say that I have to leave some of my natural hair color so I don't get the dreaded dark roots.  He still doesn't understand because that falls into the girly stuff category that he doesn't want to understand, but whatever because I know what's best, don't I?
So imagine my excitement when I found a salon school in Houston, The Aveda Institute, that was so affordable and seemed really luxurious too.  I was counting down the days to my appointment and was so ready to be made over!
Originally when I planned to do this post, I was going to recommend this place, but now that it's about time to go again I'm not sure I will.  They are so blasted slow that I was there all day. I know I have more time than money, but even I don't have that kind of patience. I was literally there from 9 am until 4:30 pm. I did have a mini facial, mani & pedi too, but that shouldn't have taken long.
The problem with going to a school is that they are learning and they have to consult with the teacher.  In principle that makes me feel warm and toasty that nothing bad is going to happen, but on the other hand it kind of bothers me that they don't really know what they are doing yet. In fact, they were running so short on time that the teacher cut my hair for her just to be done with it.  I was so happy because I was a little nervous how this girl was going to cut my hair. She just didn't seem to know how to do it.  I thought, how hard is it to cut my hair like Reese Witherspoon in Sweet Home Alabama??
Here's how it looked right before Christmas after I went.  It looks really short but there's a lot of hair hiding behind my ears.  I'm ok with the job they did on my hair because of the low price, but it really wasn't a good job.  If you could see the back of my hair, there is one really thick blonde streak that doesn't belong.  And they basically didn't cut the front side part of my hair at all so it's looking pretty scraggly by now.  But today is 8 weeks since I had it cut and it seems to be growing out the color well. 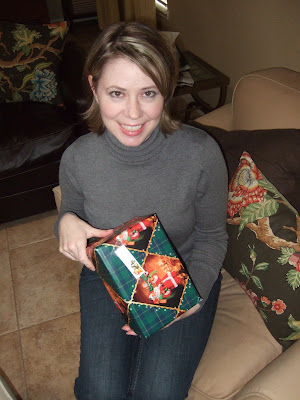 Opening Christmas presents from my family before going to Puerto Rico
This was my experience and I'm feel that I'm not being completely fair and wouldn't want to dissuade someone from going there to benefit from the savings, but I wish I had been warned before I went. My recommendation is to not take advantage of too many services in one day. Just stick to a haircut or cut and highlights and maybe you'll only spend half the day. Take snacks, drinks and something to read. I rarely have cash on me but I did manage to scrounge up 70 cents, but the vending machine only had 75 cent items. I was starving by the time I left.
I think the lesson here is that that in hairstyling like everything else, quality is better than quantity.  Since I don't want to pay the high prices in Houston for regular appointments, I'll just work with a good stylist so I can come less often. My goal now is to go every 12 weeks and the way it's looking now, it's doable, mostly because I have my natural color showing.  Also, it's less expensive to only have partial highlights.  Since it's the style to have darker hair underneath, this can work for you too.
There are Aveda Institutes in several cities, which you can see when you click here.  I found out there is also a Paul Mitchell school here, but do I dare?  I'll let you know if I do.
at January 31, 2009

hey, i like that cut, it looks really cute on you. i'm really picky about my hairdressers, too, but i see that i have much different criteria. i look for ones that aren't too chatty because it's such a relaxing experience for me, i just want to close my eyes or read a silly magazine.

Sherri-I'm the opposite. I get upset if they don't talk to me, and talk to other people!

Maybe you could wear an ipod and they'll get the hint.

Your hair looks great. I have a fear of commitment with hairdressers and I don't mind changing when what they do stops working for me. I've been trying to find the right balance between talent and price lately and I think I've finally got it, and the salon is located really close to my house. I too, am stretching my appointments out longer to conserve the cash.

I love the cut and the colour. You look amazing. Well, you always do. You are such a beauty.

Belette, Aww, you made me blush. Thanks for the compliment. I don't know what you look like, but I know you are beautiful too, on the inside which is the most important part.

Stephanie H., I'm like you now where I don't mind switching hairdressers, but I used to be so loyal. I felt like i was cheating on them if I went somewhere new.

That's great you found someone who works for you and is close by. Here is Houston, location is everything!

I think the Paul Mitchell ones are even slower, gauging by my time spent at the one in Addison/Carrollton. At least at Aveda you will have some people who are becoming estheticians and nail techs, but I don't think that is the focus at Paul Mitchell at all, just hair. And they are really, really, really slow. I think it took them over an hour to straighten my hair with a flat iron while I waited for a friend to get a haircut. And THAT took even longer, and my straightening didn't even look very good. :(

But your hair looks really cute in the photo! I came across your review while looking for reviews on the actual school by students, but this was helpful too, thanks!

Found your blog while researching a possible pixie cut at my regular Aveda salon.